Will the VVA outlive its founding generation? 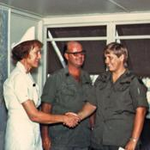 Ken Rogge vividly recalls his return from a tour of duty on a fighter-bomber base in Thailand. In 1970, an Air Force transport plane dropped him off at the San Francisco airport, where the staff sergeant was obliged to walk through an angry mob of hollering, spitting war protesters. “There was one of me and twenty of them,” he recalls. “The United States was not a pleasant country for someone serving his country in those days.”

Sandie Wilson was an Army nurse who spent “eleven months, twenty-nine days, and six hours” in Vietnam in 1967 and 1968. “It wasn’t easy for anyone–man or woman–coming home from Vietnam,” she says.