How does an organic chemist spend his time when he retires? 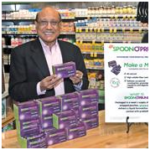 Well, if he’s Om Goel, he doesn’t ride off into the sunset. He launches his own company, develops products, and then teaches himself manufacturing, packaging, marketing, advertising, and business practices so he can sell them.

A native of Old Delhi, India, Goel, seventy-three, earned his doctorate in organic chemistry at Carnegie-Mellon University and landed a job with Parke-Davis in Detroit as a pharmaceutical researcher. In 1970, Warner-Lambert bought Parke-Davis; when the Detroit operation closed in 1981, he transferred to WLPD’s Ann Arbor lab, which in time became Pfizer’s. When Pfizer skipped town in 2008, he retired–and then opened his own company, Jiva Pharma, Inc.