In 1931, a mob threatened to avenge a quadruple murder. 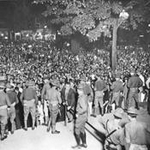 This 1931 Ann Arbor lynch mob photo –“iconic,” if ever there was an “iconic” photo of an Ann Arbor historical event–has suddenly turned up for sale on eBay, posted on a “Buy it Now” page, priced at $53.00. Unseen by local eyes for eighty-three years, it would be a pity if it were lost to us now.
~ Email from Wystan Stevens, December 2014.

END_OF_DOCUMENT_TOKEN_TO_BE_REPLACED

A golf course subdivision confronts developers who want to build on its fairways. 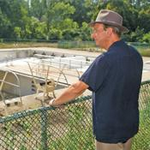 An army of white-haired dandelions marches across the greens at Ann Arbor Country Club, like the ghosts of long-gone golfers. Last autumn’s fallen leaves blow against the clubhouse’s locked front door. The grass on the once meticulously groomed fairways is now knee-high. Throughout summer’s hottest days, the pool yawns, empty. Tennis courts are cracked and netless.

“It hurts to see this,” says Peter Logan, president of the Loch Alpine Improvement Association (LAIA) and longtime AACC member, as he surveys the formerly pristine course. “The golf course predated our neighborhood, and most of us bought our homes here because we either liked the idea of living in a golf course community or at least liked the idea of having beautiful rolling green space in our neighborhood. Generations of young swimmers have trained in our pool–we’ve had some serious Olympic contenders start their careers here. But no more.”

END_OF_DOCUMENT_TOKEN_TO_BE_REPLACED

The last veterans are in their nineties now. But they haven’t forgotten. 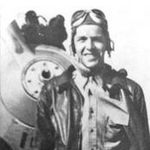 On Christmas Eve 1944, in Southampton, England, George Bigelow and the U.S. Army’s Sixty-Sixth Division boarded the Leopoldville, a converted Belgian cruise liner bound for France. They were rushing to reinforce depleted American forces fighting the Battle of the Bulge. But the unit, nicknamed the Black Panthers, never reached that battlefield. A German U-boat sank their ship, plunging Bigelow and 2,000 other soldiers and sailors under the icy waters of the English Channel in the middle of the night.