Loss and Living On

Gig Olsen’s Secrets of a Long and Happy Life 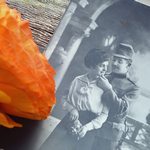 I have just finished a program of WWII remembrances at a local women’s club when Luragay Olsen–known to all as “Gig”–touches my shoulder. “My first husband was a fighter pilot. He was shot down over Augsburg, Germany, at the end of the war,” she confides, teary-eyed.

For five years, I have known and admired this cheery, amazingly youthful nonagenarian. “Can we talk?” I ask.

She touches my hand. “Come see me. I’ll make fudge.”

A few days later, she welcomes me and a mutual friend, JoAnn Gardner, to her Glacier Hills home. Gig has witnessed nearly a century of social and political change, still makes the best fudge in Michigan, has just finished her seventh quilt, drives herself and friends, pampers her children and grandchildren, plays bridge twice a week, serves in several organizations, attends church, and golfs regularly. (“Though now I only play nine holes, I make myself useful by pulling the flags out of the holes on the back nine,” she says.)

Born in La Crosse, Indiana, on March 24, 1922, and named for both her grandmothers, Luragay earned the nickname Gig at an early age “because I giggled so much. I guess I still do.”

She and her sister were young when their parents divorced, and their mother brought them to her parents’ home in nearby Hanna. “Those were Depression days, but I don’t remember hard times,” Gig says. “My grandfather was a dentist, so he could make a living, and my mother taught music lessons and art in the local school. She didn’t earn much, but we got by.”

When her mother remarried, they moved to a nearby farm. “My mother, sister, and I had to learn the ways of farm folk then–particularly threshing and making threshing dinners on days when workers came from all over to help us. Those were good times,” she says.

Gig was among the few women of her generation to attend college. She was a junior at DePauw when she met her first husband, who was living in a hotel across the street from her grandparents’ home. “He would call to our dog and pay him a lot of attention because he wanted an excuse to meet me,” she says. She pauses and appears to gaze far into the past. “His name was Donald Best. He was an engineer surveying for the railroad when we met. I guess you could say we had a whirlwind courtship. We were married in my grandparents’ home, a beautiful Victorian. My grandmother baked the cake. My sister stood as maid of honor. I wore a gray suit.”

Several months later, in the summer of 1942, the couple left for Florida, where Donald trained as a fighter pilot. “The short time we had together was wonderful. He was a kind, good man,” Gig says quietly. “When the War Department told me he’d been shot down, I felt as if the whole world should shut down. But it didn’t.”

Gig’s sister was working with wounded veterans in Washington at the time. She urged Gig to move in with her, and Gig landed a job she loved at the U.S. Patent and Trademark Office. After the war, she met Dearborn native Finn Olsen. The naval veteran shared her birthdate (“He always said, ‘Giggy loved me so much she changed her birthday.'”) and won her heart.

In 1952, Gig Best became Gig Olsen and moved to her husband’s home state. A U-M Law School graduate, Finn became Ann Arbor’s first patent attorney. The couple raised cattle and two sons, John and George, on a farm in Manchester before retiring to Ann Arbor, where Finn died in 1987.

Despite her losses, Gig has lived a long, happy life. What’s her secret? With twinkling eyes, she answers, “Not knowing anything to say with positivity, I hesitate to affirm lest I err.”

After JoAnn and I laugh, she answers. “Well, there never was any alcohol in my family. Once at IU I had a drink of cherry cordial, and I sat in a corner the rest of the day. I never drank a drop after that.”

She adds, “My family was full of faith–good Midwestern faith. Family is absolutely tops, so love each other–from the top of your head to the tip of your toes.

“Kindness, compassion, and a positive outlook help you get somewhere.”

And, lastly, “Live life in such a way as to have no regrets–and continually find joy in the journey.”

In the May, 2016 issue of Ann Arbor Observer
AnnArborObserver.com