Have Desk, Will Travel

That might be the motto for the business Jon Ryburg runs out of his Dexter home. 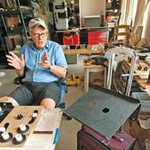 When the office closed, he turned down a job at the company’s west Michigan headquarters to strike off on his own. He’s now a consultant and one-man manufacturing company, making portable desks for travelers spending long hours in airports and professionals working at industrial, construction, health care, and renovation sites.

Saws whine and routers buzz as Ry- burg fashions parts and assembles desks in his basement workshop. “As I see it, this niche of the market has three requirements: portability, lightweight materials, and easy assembly,” he explains, brushing the sawdust off a component and adding it to a pile of similar pieces. His largest desk weighs approximately three pounds, packs into a heavy nylon tote bag, and can be assembled in the time it takes to write a check.

“Before launching my business, I spent a lot of time in airports, researching the ways people try to be productive in less-than-optimal situations,” Ryburg says. “Many travelers sit, sometimes for hours, with laptops in their laps, papers spread out on the seat beside them, and their cell phone on their ear. Meanwhile, their wheeled cases sit nearby, idle. I challenged myself to come up with a product to convert that expensive rolling infrastructure into a desk.”

Once he identified the need, he built prototypes and opened for business as DeskSpaceAnyplace.com in 2000. He makes two different desks that can clamp onto wheeled cases and a third that fits over the baby seat in a grocery cart.

All his desks have at least two functions–“an idea I attribute to my wife, Carole,” he points out. The luggage-mounted models can also stand freely on three telescoping aluminum legs or tilt on a tabletop. A swing-out mouse shelf, adjustable document holders, and laptop security straps are optional.

“This is a twenty-first-century company,” Ryburg says. Manufacturing, marketing, and packaging all take place in his home, and sales are generated entirely through the website. “The mainstays of business have given way to the Internet,” he says. “I gave up my 800 phone number because the only calls I received were from people wanting to sell me something.”

He maintains close ties to the industrial and workplace furniture industry. In his basement, three mysterious mounds covered with sheets testify to the fact that he remains a business-technology consultant who studies and tests the viability of other designers’ new–and proprietary–prototypes.

“Professionally, I live for the fun of identifying needs and designing products that help people.” Ryburg says. “I’ve developed a strong, interesting niche. I like the challenge of creating new ways to help people work more efficiently.”

In the December, 2015 issue of Ann Arbor Observer
AnnArborObserver.com