Coming In From The Cold 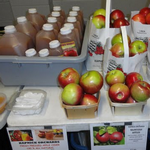 All these–and much more–are weekly staples at the Saline Indoor Farmers’ Market, which runs from 9 a.m. until 1 p.m., on winter Saturdays.

Whoa. Back up. Alpaca wool socks?

Yup. Whether you’re looking for staples or exotica, there is, quite literally, something for everyone at this market.

“Alpacas are actually easier to grow than sheep. They’re ecologically friendly and produce wonderful fibers for crafts,” Sue explains as she crochets a scarf and her husband works a sock-knitting machine. Their wool skeins come in a glorious array of colors and textures.

According to market manager Nancy Crisp, the idea of a winter farmers market became a reality in 2010. That’s when city council member David Rhoads and his wife, Leslee Niethammer, decided to host twelve vendors inside an office building Rhoads owns (Niethammer owned Ed’s Breads before selling the business to her sister and brother-in-law, but still represents the bakery at the farmers market).

Crisp agreed, and southeastern Michigan’s first indoor winter farmers market opened for business. The public floods the school halls prior to Christmas and through the end of April (except for March 21, when the school hosts a huge craft fair). In spring, most vendors begin making the rounds of outdoor farmers markets.

By late January, Don Dietrich was the only farmer selling vegetables on Saturday mornings. A veteran of sixty years of plowing, planting, and harvesting, he researched hardy crops appropriate for his Gregory farm when he agreed to join the winter market. “I learned I could grow storage cabbages–red and green–that would last through the winter. Also onions and Pontiac Red potatoes–and once you’ve had them, you’ll never want another potato,” he promises. By Christmas his other cold-season vegetables had sold out.

Paul Kniffen does a land-office business selling eggs and frozen chicken. Kniffen’s family has owned their farm in Britton since 1864, and he endears himself to customers when he talks about his “girls”–he has 300 feathered friends in winter and 1,200 in summer.

Several bakers offer mouth-watering wares. Carola Guenther, a native of Germany and resident of Superior Township, rises not long after midnight on market mornings to bake cookies and her trademark pretzels from doughs she mixes earlier. “People come to me for my pretzels,” she says. “The rest of my display is eye candy.”

Every week, Noah Brown designs avian streetscapes with birdhouses and bird feeders, while his wife, Janet, sells homemade chocolates, spice mixtures, jams, and crafts. “This market gives us something to do in retirement,” Noah says. “We’ve made great friends here. We live between Dexter and Chelsea, but we look forward to the trip to Saline every week.”

For sixty years, Makielski Farm in Pittsfield Township has cultivated strawberries, raspberries, and bees. In winter, Ed Makielski sends his bees to Georgia and trucks jars of jams and honeys to Saline. “The honey you see on supermarket shelves can have 45 percent corn syrup,” he says, offering a sample of his raspberry honey. “There’s a world of difference in flavor.” He knows his business: he’s raised bees since the age of fourteen.

Jason Sutherland sells apples, cider, and baked goods for Kapnick Orchards, a thriving family farm presence in Britton for eighty years. “I’m a stay-at-home father who enjoys getting out of the house one day a week,” he says. “I like what I do, and I like the people I work for.”

“Our shoppers are convinced that buying local produce and supporting local farmers and business people can be mutually beneficial,” says Nancy Crisp. Vendors and the public became one large, supportive family.”

In the April, 2015 issue of Ann Arbor Observer
AnnArborObserver.com